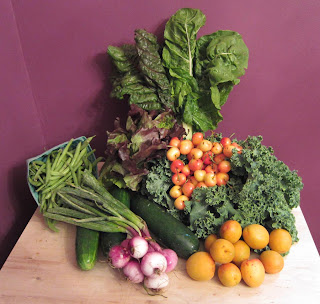 Another pretty week in the farmshare.  Green and orange and purple and red.  After four weeks, I'm realizing that it's pretty easy when you choose your own veg.  There are no beets that way, and no weeks where you get three bunches of scallions, and you can always be sure you have salad on hand.   This week was a slight disappointment, as we found out over the weekend that something went wrong and those of us who had ordered arugula weren't going to be able to get it, but I had no problem swapping out for kale, and that's why we do this, right?  We buy the produce that's available now, and we're helping to balance out the risk of farming - if this farm had to deliver arugula to Shop Rite, they'd be screwed, but since it's me, I'll take kale. 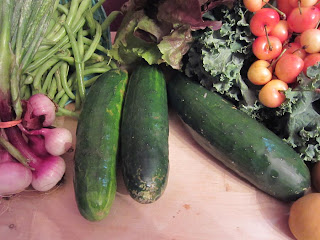 Chard.  It's my leafy green of choice. 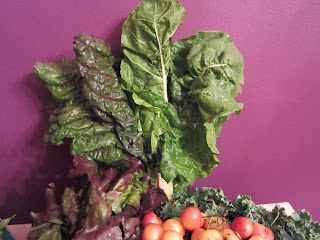 Red leaf lettuce.  Lately we've been ending up with surplus lettuce, and that won't happen this week.  I'll try to squeak out two salads for each of us. 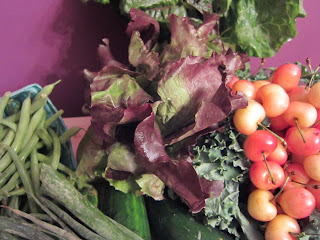 Kale.  I'm not a big kale fan, but I know it's good for us, so I'll play with this.  Send me your kale ideas - too hot to keep the oven on to make kale chips.  Cherries!  Sous Chef Brian is anti-cherry, but when I bit into one of these I assured him it tasted nothing like the cherries he was used to.  Unfortunately, it has enough of the qualities of a grape or an apricot to turn him off.  I like them though. 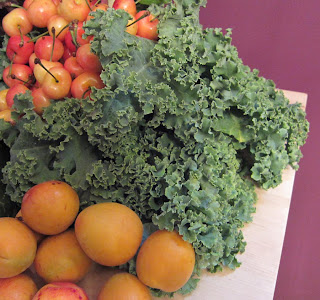 Scallions, or something.  When my scallions were purple before, I wondered if there was a difference between purple scallions and white scallions, and my cousin-in-law might have implied that I was an idiot, pointing out that scallions are just onions that aren't done, so they come in all the colors onions come in.  Ok, fine.  This week, though, I ordered "red onions" so um, my onions aren't done. 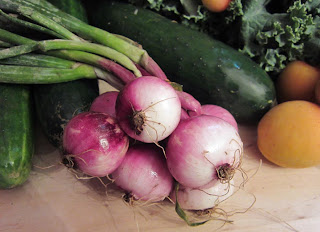 Apricots.  I wish I liked these.  It's ok, I've already got plans to give them away, but they sure are pretty.  The fruit share might have been a mistake for us.  Two weeks ago when we got fruit everything had spoiled by the second day (those gorgeous strawberries!!), so the farm sent extra fruit this week, which just means I have more apricot than I can handle.  I just can't handle much apricot. 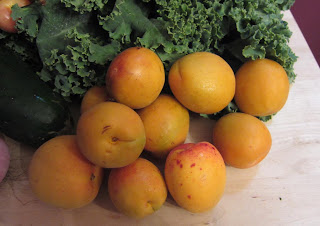 There are green beans, too, but they have a bad attitude and refuse to pose for the camera.
I already have plans to make falafel (not for you all, I've already made it for you), and gazpacho, but send me your kale ideas, because I'm a kale wimp.  Or if you have some great idea for green beans.  Let me hear about it.
Posted by Rose