Pancakes and the magic of home cooking 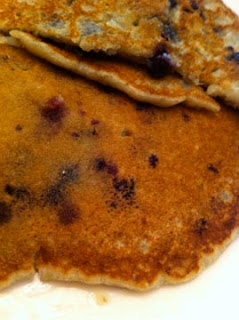 I've said before that pizza was the start of our personal cook-at-home revolution, and that's pretty true.  Once we realized we could make our own pizza, making our own [fill-in-the-blank] wasn't far behind.  If pizza was part of the solution, then pancakes were the problem.

A million years ago, pancakes were the big joke, because I couldn't successfully operate a box of Bisquick. There was a distinct tone of: "Rose can't even make pancakes," around here. I said it too, all the time.

And even once I felt like I could handle myself in the kitchen, once I was making all my own salad dressing and nearly all my own bread, I still wasn't trying to make typical pancakes.  I loaded them up with flax and wheat germ and said, "No, they're not supposed to be soft and light, they're different from those pancakes."

These are the recipe in the Good Housekeeping Cookbook.  Plus some whole wheat flour, and almond milk in place of cow milk, and some blueberries. Diner-style, thin, soft, slightly sweet pancakes.  It's a pancake revolution around here.

I have friends who say things like, "I just don't cook," and to them I say, "Look at these pancakes."  For years, this simple thing that lots of 11-year olds pick up watching mom and dad on Sundays eluded me.  And then one day it didn't anymore.  One day, pancakes were just one of the many things that sometimes happened on weekend mornings. 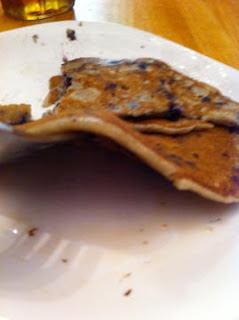 I understand that you have a high pressure job/a small kitchen/15 kids/great neighborhood restaurants/other competing interests - I get that, and I have some of those things too.  But whoa, when you're in control of it, when you determine what goes into the bread and when the supermarket has nothing to do with what flavor of salad dressing you have tonight and it all clicks, whoa is that freeing.


Yeah, we still order a pizza sometimes, and maybe there's an actual box of Ritz crackers in my pantry (for real - brand name and all), and I still screw up dinner sometimes, but just being able to do it means you have so many options.  You don't have to cook all the time, or show the world pictures of your dinner on the internet, but getting in there and getting used to it and creating a situation where you could do it all the time if you wanted to, that's super-rewarding.


You know what's a nice reward for all your effort?  Pancakes.