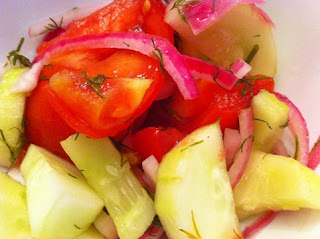 Remember when I made the cucumber salad and there were a lot of variations on the interwebs?  Like with anything.   A couple of recipes called for tomato and onion, which definitely was not anything like the original, but sounded fantastic to me.  July has been about barely being able to drizzle vinegar over veg without breaking a sweat.  So I went for it. 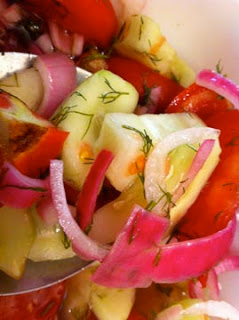 I chopped the cucumbers into fatter chunks, so they'd be fork-friendly with the tomato, and sliced some red onion.  Other than that, same marinade.  Vinegar, sugar, salt, white pepper, dill. A full day in the fridge. 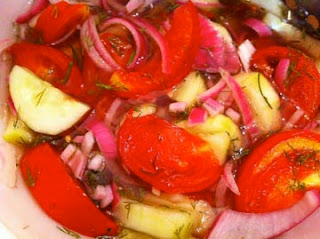 This is cool and refreshing and there's enough going on with it that it doesn't have to be a side dish, in the middle of a heat wave this is totally dinner.


Several of the recipes, whether for this sort of thing or for cucumber salad called for cutting the vinegar with water.  If you're not a vinegar person (and I am definitely a vinegar person) go ahead and do that.  They'll still be pickly, but maybe not overwhelmingly so.
Posted by Rose