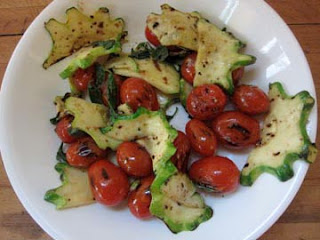 When it gets to be the end of the week, and just for confusion's sake, by the end of the week I mean "Wednesday," it's time to really think about what's left in the fridge.  The CSA foods show up on Thursdays so Wednesday's dinner is really our last chance with last week's veg.  Sure, we might find last week's pattypan squash in the fridge, buried under this week's foods, but the chances of us using it drop dramatically once we pick up a new haul.  So Wednesdays are about cleaning out the fridge and eating what we find.

I had one small pattypan squash and half a container of tomatoes* from last week's haul.  I grilled them both and called it salad.


I started with the pattypan squash.  Actually, there were two squashes but one didn't make it, so that's a reminder to eat your produce on time.  It's also a note to say, "Yeah, I realize there isn't a lot of squash in this dish.  Perhaps you'd like to add more."  Zucchini would work very well here, I just didn't have one.

I sliced it fairly thin and set it aside for a moment. 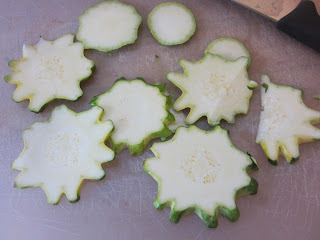 I threw the tomatoes on an indoor grill spritzed with olive oil.  You could do this on a real grill if you had a grill basket or some other way to corral your tomatoes.   I rolled them around occasionally on medium-high for a few minutes, to give them a head start before the thin-sliced squash went on. 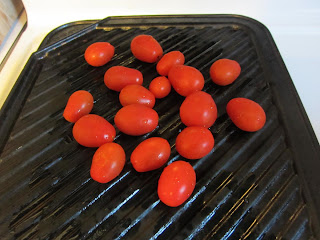 I added the squash and let that cook for maybe a minute per side.  If I had an onion, I'd have sliced that up and added it as well. 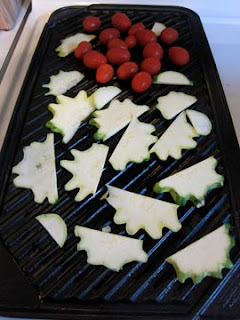 The tomatoes are done when they start looking damaged and you can squish them with a little bit of pressure from your spatula.  The squash is done.  Don't worry about the squash.  Is it slightly browned?  It's done. 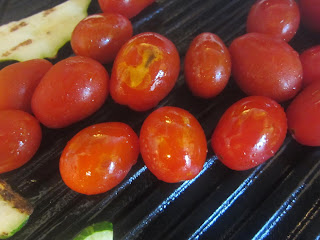 I put the veg into a bowl and gave it an olive oil misting. 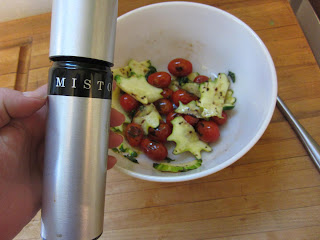 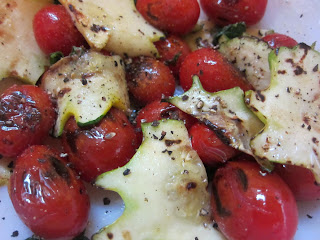 And I threw in a few basil leaves. 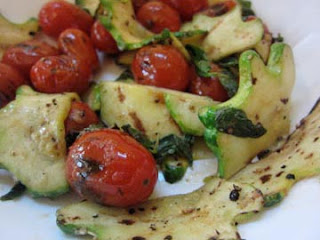 And parmesaned it.  Like a half a teaspoon?  Less even? 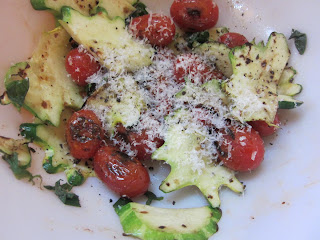 And that was it.   I served it warm, but I think cold would have worked as well. 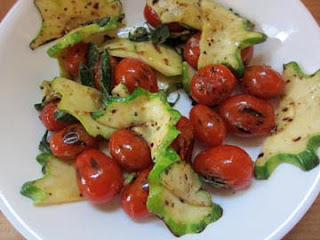 If I had an onion, that would have worked, or some eggplant or any other summer squash.  It was just done enough that it tasted fancy, which is always a surprising outcome after less than 10 minutes in the kitchen.

*I'm calling them "tomatoes" because I have no idea if they're cherry tomatoes or grape tomatoes. It doesn't matter to me either way, but I don't want folks to think I threw "a container of" full size tomatoes on the grill.  Good thing we have pictures, eh?
Posted by Rose