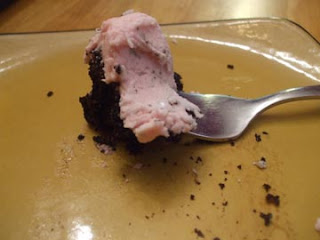 In 87 posts, not once have I made dessert.  And it's not like I'm whipping up cakes in my free time and not posting about it.  I'm not dessert oriented.  A cookie here or there, and a piece of good chocolate now and again and I'm all set.  I don't care for pastry, and there's something that upsets me about glazed and cream-filled things.  Doughnuts make me queasy.

I'm not opposed to cake, but I don't seek it out.  I tend to make a cake a year, for Sous Chef Brian's birthday.*  It's not good or anything, but it's cake.  I did this six months ago, I'm all set for the year.

But I had reason to make a cake this weekend, and I went with some Internet recipe. I can't find the source, but I do have it written down.  Mine now.  But I'm not here to post how to make a cake.  I can BARELY make a cake.

What do I mean?  Well, this one was delicious, but I started out thinking I was gonna make cupcakes, and only had liners for 12 of the 24 it was supposed to make...so I buttered the other cupcake slots, battered them all up (overfilling each one) and then had half the batter left, so I threw it in a cake pan and baked it alongside the cupcakes.    As expected, only the 12 cupcakes with liners were at all salvageable, and the cake, for no known reason, sunk in the middle, so that when I frosted it, filling the pit in the center, there wasn't quite enough to go around.  And of course, the bright pink frosting was dotted with crumbs of nearly-black chocolate cake throughout.

But my point here isn't to badmouth this unattractive yet delicious cake I made yesterday.  Let's talk frosting.  I can't stand it, but as described above, I'm weird on dessert.  But I had these raspberries, and raspberries and chocolate are friends, so I figured I'd make raspberry buttercream.
Buttercream is easy.  Even I can do this.  2 sticks of room temp butter, get them going with your beaters or in your mixer, and slowly mix in 3.5 cups of sifted confectioners sugar... get it all together and add in a bit of vanilla (or something else) and if the texture is too stiff, add some milk.

So I'm Googling raspberry buttercream, and raspberry frosting, and raspberry icing and every damn recipe starts with jam.  I don't have jam, I have fruit, and I'm afraid I'll ruin the magical texture of the buttercream with the fruit.  There's one recipe out there for "just mix in raspberries" but that seems seedy and unpleasantly textured to me, and another with defrosted frozen berries, but again, I'm starting from syrup-free real live raspberries.  Anyhow, you've read this far so you know it worked.  I skipped the vanilla and cooked about 10 berries in a small saucepan with just the water that clung to them after washing...once there was some good juice going, I pressed it through a sieve and threw it in the freezer just to chill (figuring hot berry juice plus room temp butter equals liquidy frosting) and it totally worked.

I didn't plan to post this, I just saw Sous Chef Brian eating a piece of leftover cake today and said "hold that bite, we'll take a picture and I'll write this up."  So no process photos or anything, just, hey, you can make berry juice out of berries and then make frosting out of that.

People who like frosting liked it.  It tasted raspberry-y.

*ok, the truly sad story about making my annual cake this year was that I did it, it was a good cake, and I made a really good frosting for it, but seriously, a whole cake and the two of us meant we tossed a lot of leftovers.. and a week later I tried to do it again and it was NOT AWESOME - the cake itself was a standard recipe adapted to reduce sugar and add whole grain (not my modifications) and it was plain wrong, but the frosting that I had done so nicely for Sous Chef Brian was a runny mess after I tried to modify the recipe for this other cake.

Raspberry Buttercream Frosting
by May-23-2011
Simple buttercream, but with raspberry flavor and color
Ingredients
Instructions
Wash berries, don't dry them and simmer in a saucepan on low, stirring. When they soften, press through a strainer and reserve juice.Chill the juice to room temp or just cooler. Beat butter in stand mixer or with beaters until fluffy. Slowly add in sugar, while beating on lowest setting. Add a pinch of salt and raspberry juice (two tablespoons or so?). Beat for about 5 minutes on medium. If too thick, add more juice (or milk), if too thin add more sugar (sifted). More than enough for 24 cupcakes, probably enough to frost a cake properly.
Details
Prep time: 30 mins Cook time: Total time: 30 mins Yield: a cake or so
Posted by Rose