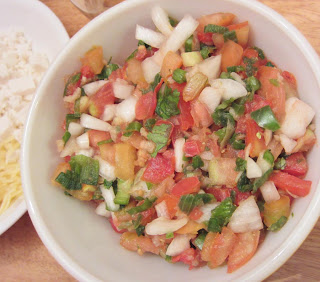 Here's the thing with salsa: there is no recipe.  I don't mean that in the same way like there's no one recipe for barbecue sauce because everyone thinks theirs is the best. I mean that I could write down the recipe this year, and make the same thing next year, and unless I'm in charge of the exact variety and timing of the produce I'm using, it won't be the same.


Some tomatoes are sweeter than others.  Some jalepenos are hotter.  Some onions sting more.  There's no knowing that it's going to be exactly the same.

Pico de gallo is a less wet, fresh salsa.  Chopped veg.  Sitting together in a bowl.  I make some salsas.  I roast some corn.  But pico de gallo isn't that.  It's about whats good right now, and eating all of it chopped together on a crisp chip.

Speaking of the unpredictability of fresh veg, I took a trip out to Headhouse Market to get the veg for this past Sunday Dinner (including this salsa)... and veg are unpredictable.  I mean, I bought three peppers to make the fajitas, and two were black inside.  That's a bummer, because fresh local organic produce ain't cheap.  Neither were my million-dollar tomatoes.  I can't wait for late summer when tomatoes are too plentiful and going for nothing, but now they're new and rare and $5 a pound.  So I got these for the salsa. 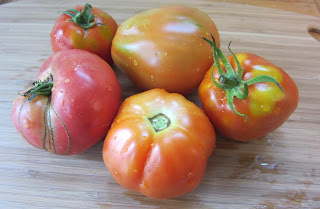 And heirloom tomatoes are ugly.  I'm fine with ugly.  Ugly and tasty are unrelated.  This one was particularly ugly. 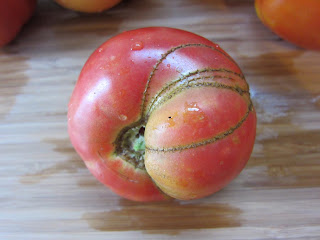 But veg are unpredictable.  I bought 5 tomatoes for about, what, 32 dollars?  And one was *bad*.  I don't mean like pale or mealy, I mean hard and black inside.  And you look at these tomatoes, and there's this ugly guy here, and clearly there's a hole it it, and what fool buys that tomato?  Me.  And it was good.


Surprisingly, this guy was bad inside: 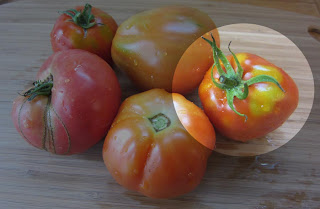 So you never know, and that's just one more reason why salsa isn't the same from one batch to another.

I started with my four good tomatoes, and cut off any super ugly bits and diced them.  Into a colander to drain with a pinch of salt. 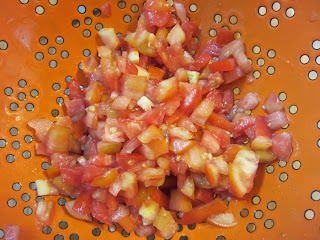 These four were about two and a quarter cups, diced. Onion, too.  I had two small cippolini onions, and a huge white onion that I planned to use for the fajitas.  So I used the greens (the scalliony bit) from the big onion as well as the little one.  Also half a jalepeno, diced. 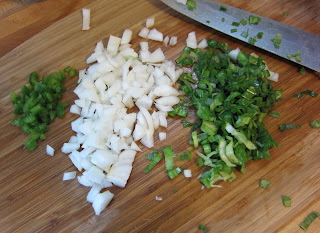 So that all went into a bowl with the tomato and two cloves of minced garlic. 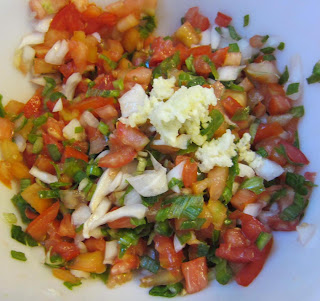 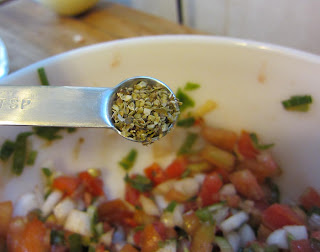 Cumin.  Ok, maybe a quarter teaspoon plus a dash. 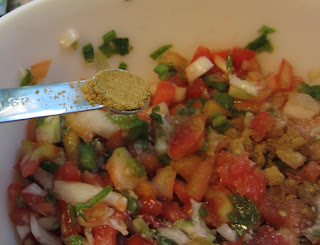 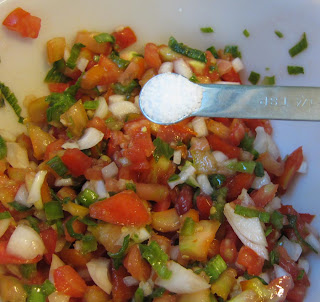 And the juice of half a lime.  And cilantro. I either tear it by hand or use kitchen shears.  I don't have much luck with a knife and a small handful of fresh herb.  With a whole bunch, it's no problem, but with just a few leaves you're going to end up with more stuck to your knife than on your board. 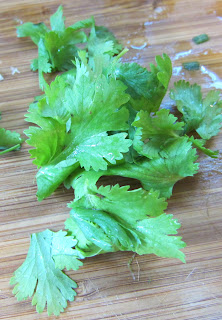 All into the bowl. 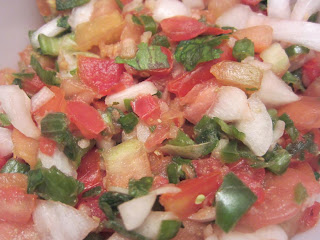 Let it sit a bit to meld.  In the fridge.  It doesn't need long.  Taste it.  Add things.  More garlic this time?  A dash of cayenne to compensate for a mild pepper?

Eat it on a chip.  Put it on shrimp fajitas.