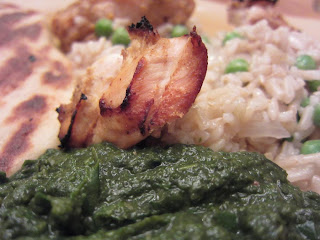 I had a birthday recently. In celebration of that, I received a dutch oven - actually, two of them.  I was excited to use one.  For some reason, I thought I had read a recipe for tandoori chicken using a dutch oven rather than a tandoor. A hard Googling tells me no, that a dutch oven creates a humid environment and is not a substitute. But of course, by the time I had figured this out, I already had chicken marinating and Sous Chef Brian had already told our mystery Sunday night dinner guest that there would be tandoori chicken.
Of course, grilling is an option, particularly in this weather, but it's fairly well-known that we suck at that.  Cook's Illustrated does it in the oven, on a rack. Sous Chef Brian remembered seeing it on America's Test Kitchen. I decided to follow their lead. Their recipe is here, by subscription.   My recipe is very much inspired by theirs, but modified a bit.
Dinner was tandoori chicken, basmati rice, chopped greens and naan.   I'll post the naan tomorrow.

I started with three boneless skinless chicken breasts.  I covered them in low fat yogurt and left them in the fridge for a while - 5 hours?  Most recipes seem to call for less marinade time, but also call for skin-on chicken, which can handle higher heat without drying out.   When it was time, I got some garlic going - 5 small cloves and one huge clove, minced. 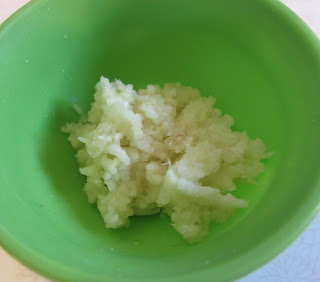 I heated some safflower oil up to medium and swished the garlic around in there for a sec... 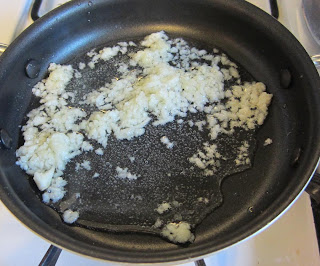 And then I added spices - the spices that caused our dinner guest to walk into the house at this moment and say, "Whoa, it smells like Indian food." 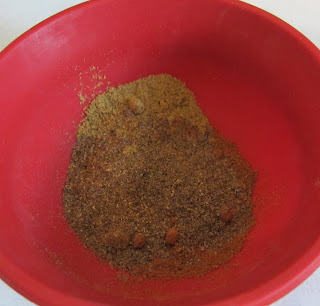 It's garam masala, cumin and cayenne.  1 tablespoon each.  You can make your own garam masala blend - Google it, there are lots of recipes with slight to significant modifications.    Stir the spices around in the oil and garlic just for a minute on medium. 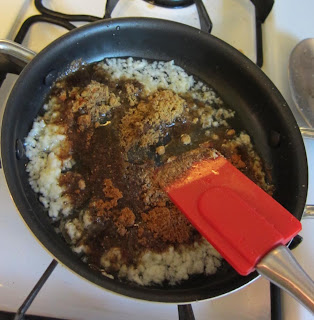 And turn it off.  Squirt in three tablespoons of lime juice. 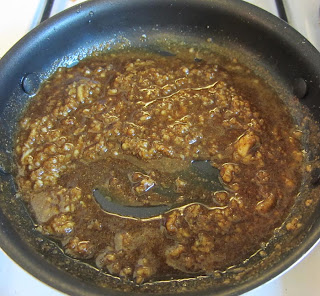 When it's time to cook the chicken (and say this because I was making other foods, and the chicken waited a bit), dial the oven up to 350.  Take your yogurt marinated chicken (I had breasts sliced into fifths) and shake off extra yogurt, and rub it around in the spice mix.  Really coat the chicken in spicy yogurt.   Then lay the chicken pieces on a rack over a baking sheet. 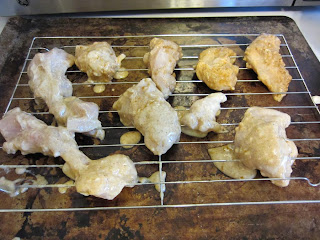 I had two of these going on.
And into the oven for 20 minutes.
Let's talk greens briefly.  I wanted greens that were mashed up well enough to almost serve as a sauce if the chicken was too dry.   I chopped up some chard 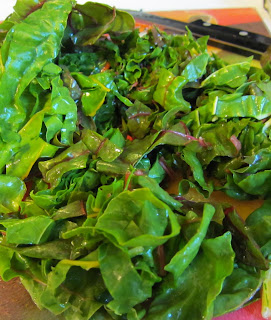 and then realized it wasn't quite enough, so I added some frozen spinach. 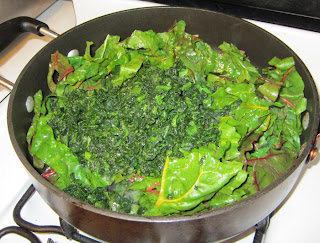 We started them in a bit of oil and some garlic (2 cloves, sliced, but you should use more) and a bit of mustard powder, salt and red pepper flakes.  Then added just enough water so it simmered.
After 20 minutes in the oven, we dialed the chicken up to broil - not moving it or flipping it or anything.  It had 10 more minutes like that to char up a bit.
Meanwhile, we hit up the greens with the brand new immersion blender (thanks Laura!) and mushed them up pretty well.  You could use a regular blender too. 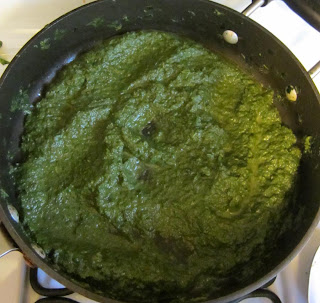 That's really it, other than the naan and rice that I'll post tomorrow.   The chicken was crisped and charred on the outside, but not at all dry inside.  It was the kind of spicy that sneaks up on you - it starts off sweet and a bit smoky and finishes with a bit of a kick.  The chicken was a huge winner.   The greens, as noted above, could have used more garlic, but the texture was on point. 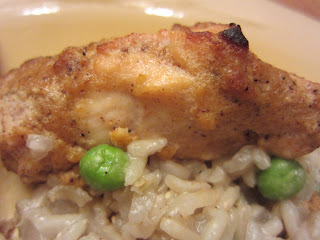 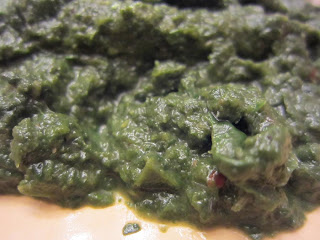 We had this with naan and rice, and there was enough for three of us with a bit, but not quite a hearty serving left over.   Naan tomorrow.
print recipe

Boneless Skinless Oven Tandoori Chicken
by Saturday's Mouse May-31-2011
Tandoori-style flavor without special equipment - Adapted from Cooks's Illustrated
Ingredients
Instructions
Cut the chicken into large pieces, about 5 per breast. Pour yogurt over top and marinate in refrigerator for several hours. Heat oil in small skillet and add garlic. Saute on medium for one minute, then add other spices. Stir for a minute and then turn off. Add lime juice and stir. Preheat oven to 350. Shake chicken pieces to remove excess yogurt, and coat in spice mixture. Lay on a rack on a baking sheet uncovered in 350 degree oven for 20 minutes. After 20 minutes, dial the oven up to broil and let the chicken go another 10 minutes.
Details
Prep time: 5 mins Cook time: 40 mins Total time: 5 hour 45 mins Yield: 3-4 servings
Posted by Rose