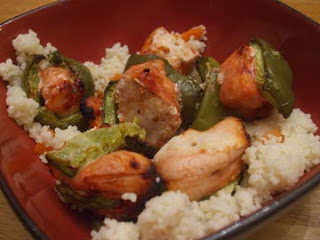 I know you don't want to read me bitching about chicken again right? Or is that what you come here for? I'll cut to the chase for those of you who like to skip ahead: theres no real recipe here, but you'd like this, it was good, and I'm sure the day you make it, it won't go as badly as it did for me.


I wanted to make something with harissa, which I've only had a few times, but really like. And I'm a huge fan of the sweet/hot combo, so I thought I'd coat chicken in harissa and honey and grill it. That was the plan, at 5:30 PM. Dinner was at 10:30, on the couch, and there may have been some angry words spoken in those five hours.


Harissa is a delightful condiment made mainly from dried peppers.  Recipes for it are pretty consistent, and many say to use a blend of peppers.   I didn't have a wide selection of dried chiles in my cabinet.  I had dried Chile de Arbol.  Chiles de Arbol?  (brothers-in-law, surgeons general) 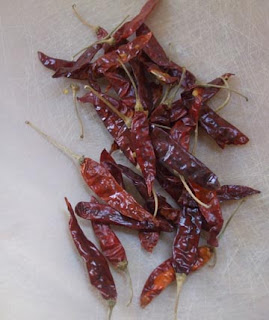 I don't touch serious peppers without gloves, because I've developed an increasing wimpiness in my old age, and burned my hands a few times, but this hasn't been a problem for Sous Chef Brian.  So I asked him to seed the peppers.    About midway through, he asked if he should be nervous, because I had been standing there with my hands behind my back to make sure I didn't touch any of it, and I said I didn't know... that I wasn't really familiar with these peppers, but you know, don't touch your face.  He continued on, more cautiously, and I didn't want to have freaked him out, so I put a tiny piece of dried chile in my mouth.  Nothing happened.  It was like eating paper.  So I told him they weren't bad at all.   Seconds later, he announced that his nose was burning, and asked me to get an alcohol pad.


Why an alcohol pad?  When I had a bad time with a jalepeno in a Banh Mi several months ago, the Internet said that for some people, this works to remove whatever's causing the reaction.  For some people.  I don't know if that means it's a detached earlobe kind of thing, or if it's like hypnosis and religion and you have to believe, I don't know, but the alcohol works for me.  I ran and got a few pads - why we have a huge box of these I don't know, we're not diabetics or heroin users, but we have a ton of these. 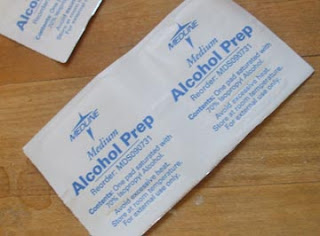 So I'm wiping his nose with alcohol (which stings in itself) because his hands are all unsafe and peppery... and I think it's over and he goes back to seeding the peppers.  I put the peppers in hot water to rehydrate (like a sundried tomato) and he washes his face and continues suffering and starts Googling other answers for capsaicin burns (lemon juice, salt, sugar).


Once they were re-wetted (half an hour in very hot water), they smelled super spicy. 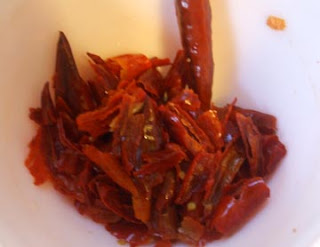 So I Googled them, and yeah, they're fairly serious peppers.  The plan, based on the 47 recipes I had read, was to throw these in the mini food chopper with cumin and corriander and salt, and use veg stock (in place of oil) to make a paste.


But one of the websites said you could cut the heat with roasted red peppers, which I had on hand.  So I made fire paste, with about a half cup of rehydrated chiles de arbol, a tablespoon each of cumin and corriander and a 1/4 teaspoon of salt, with enough stock to make it pasty, and it was unholy hot. 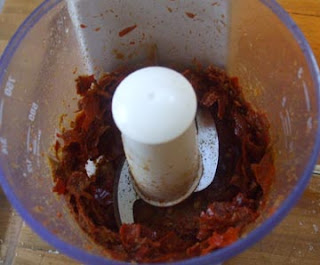 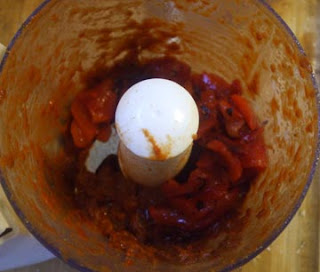 I asked Sous Chef Brian if he'd be willing to eat it like this, and he said no, but suggested adding some lemon juice (because the interwebs told him this cut the heat, but of course, he's thinking first aid in his search), and we squirted some in and it was still SUPER hot. 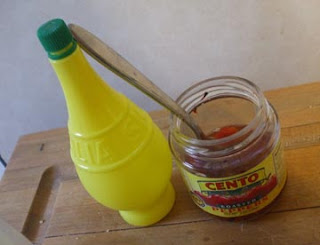 At this point, it was incredibly hot but almost edible, but the peppers had more than doubled in bulk in the process, so I added some (unmeasured) cumin and corriander to keep the flavor fairly similar to the plan. 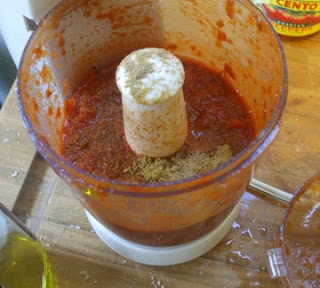 Time had passed during this process and since we were planning on using the grill and we were running out of daylight, I pushed him to move forward.  He fired up the grill, burning nose and all.   I mixed three tablespoons of harissa with a tablespoon and a half of honey and coated cubed chicken in it.   I threw that in the fridge to marinate and waited for the grill. 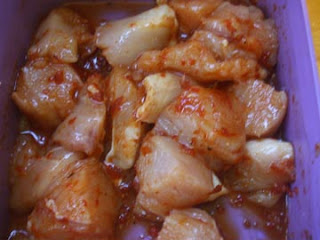 I cut up a couple of bell peppers for kebabs. 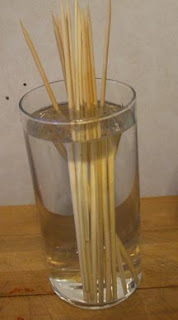 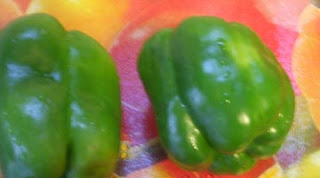 I cut the peppers into fairly substantial chunks, so they'd stay on the skewers.  Oh, and the whole time, I had skewers soaking.  Soak a bit, flip, soak a bit, or get a taller vessel. Note that there are far too many skewers here.  I was playing it safe.


So I threaded the chicken and peppers onto the skewers for kebabs, using a bit more pepper than chicken to counter the heat, and because I wasn't making a vegetable side dish.


Six skewers meant two each for dinner and one each for lunch.   I was still all optimistic and planning ahead. 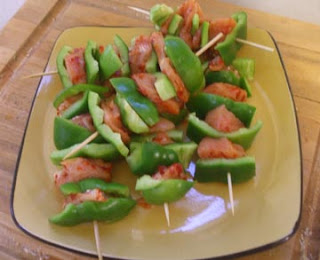 Did I mention Sous Chef Brian was getting the grill ready?  He was.


My husband is a lot of things, but not an expert griller.  He's not the guy with the set of grill tools and the apron with the snarky quote.  But he's still the one that controls the grill.  He's just, there's no real polite way to say this, terrible at it.   I'm terrible at lots of things, we all are, he just happens to be terrible at grilling and shaving.


Food takes forever on the grill.  We have no control of anything.  We know this.  The only thing we successfully grill is pizza. 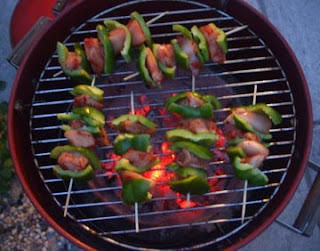 So I ask him how long he thinks the chicken will take, and he says "oh, they're small pieces, maybe like 5 minutes?"  And I say 20, and he shrugs.


And we put the kebobs out.  Time passes.   We flip the kebobs.  They're raw.  They remain raw.  Sous Chef Brian pulls out the thermometer, proving that they're raw.  An hour passes.  I make couscous with carrots in it.


Darkness falls and the chicken remains uncooked.  Actually, it was getting nice dark bits around the edges, but was raw in the middle.  A second hour passes.  I kid you not.  I'm aging.  We're watching sitcoms on Netflix.

We give up.  We throw it in the oven.  It becomes instantly overdone.  We eat it. On the couch.  In front of the TV.


Here's the bitch about it.  It was good.  I mean, it was overdone chicken in that dry, crumbly sort of way, but the flavor?  It was ridiculous.   It tasted spicy, incredibly spicy, without feeling spicy.  There was no burn. No one was injured, but it tasted like peppers.   Serious peppers and roasted red peppers and green bell peppers and it was really fantastic.  Except for, you know, the texture. 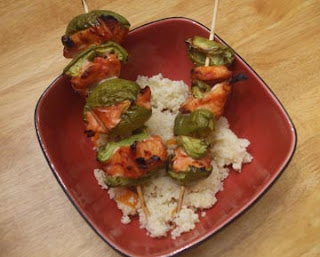 So you should make this, but you should wear gloves and plan to use roasted red peppers to supplement and tone down.  And you should cook it correctly from the get-go - if you can successfully grill, do that, if not, throw it in the damn oven.