So where were we? Right, I had half-assed some cheese with inappropriate milk. Read yesterday's post.
And as I said, I was like, "Let's make ricotta gnocchi!" because I keep reading about it, it's simpler than potato gnocchi and I like gnocchi.

I was doing some leisurely experimentation, and then found out my cousins and their kids were on their way. If you're caught up from yesterday, you'll understand that I didn't actually get photos of dinner.
Recipes for ricotta gnocchi vary wildly.  See links above.  Bittman drops dough dumpling-like into boiling water.  Other recipes shape the dough like potato gnocchi.  Some add other cheeses, some let the dough rest in the fridge and some insist you can't let it sit at all.
I started with 10oz of well-strained ricotta.
And a little bit of parmesan.  Maybe a quarter cup. 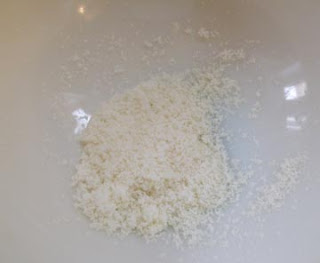 And I beat up an egg and an egg white. 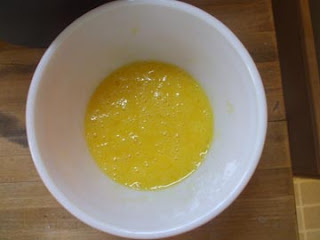 And added some salt and pepper and a cup of white flour and stirred gently. 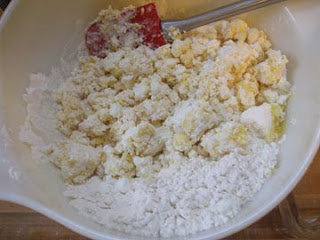 And when stirring wasn't doing it, Sous Chef Brian got into it with his hands. 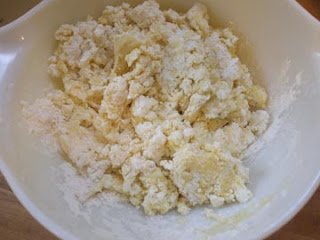 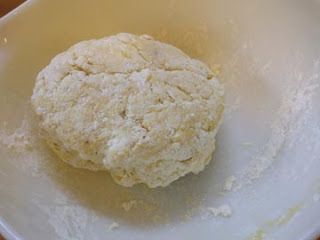 And we covered it with a bowl helmet and stashed it in the fridge. 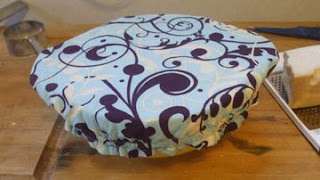 And then we found out my cousins were coming (yay!)  and I made this sauce and this bread (I added some thyme to the bread to keep it exciting).
I divided the chilled dough into handfuls and rolled it out into ropes. 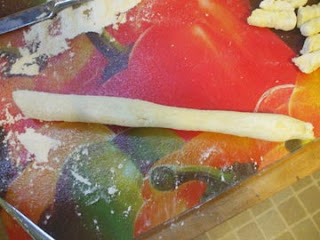 I cut those ropes into nuggets.  I could have stopped here. 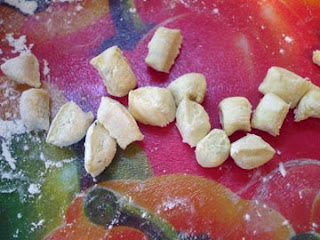 And I formed them into gnocchi.  There's a pretty easy to follow video on shaping gnocchi here.  I had no idea, so I Googled it.   Basically, you take a fork, turn it over, and flip the gnocchi over the tines, sort of folding it in the process.  Mine weren't perfect. 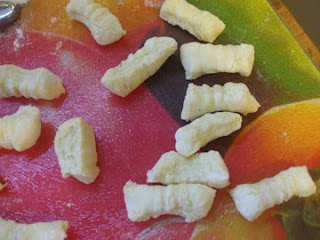 And then I stopped taking photos.  I was making bread and croutons and sauce and salad and I just couldn't keep up.
When it's time to eat, and seriously, I mean right then, you drop the gnocchi into boiling water for 5 minutes (they sink, they float) and serve them right up.  I did it in two batches - you don't want them sticking to each other.
I served it with my standard tomato sauce, but these are light and flexible and could go with almost anything.  The recipe here served four adults and two kids - if one kid had eaten it (she didn't), but instead the adults picked at her plate.  So it was just enough for six.
print recipe

Ricotta Gnocchi from Homemade Ricotta
by Saturday's Mouse May-3-2011
More delicate than potato gnocchi
Ingredients
Instructions
Mix it all together by hand until it forms a dough. Place in refrigerator to chill. Roll out into ropes, and cut into pieces 1/2 inch to 1 inch. Roll over the back of a fork to shape.Drop in boiling water in batches, boil five minutes.Serve immediately.
Details
Prep time: 10 mins Cook time: 10 mins Total time: 40 mins Yield: 4-6 servings
Posted by Rose