This isn't a fail, in that they tasted good.  But they weren't pretty.  So you can improve on my technique or maybe don't serve these to guests. 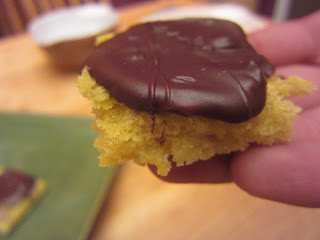 In 2001 I had some cookies, and they were awesome.  They were LU Pim's Orchard Pear biscuits.  Here's a conversation on The Kitchn about how awesome they are.   Pim's are around in orange and raspberry flavors, and they're great, but not like the pear ones.  These were very special cookies, with a firm cake base and a fruit jam filling, topped in dark chocolate.  One day, I couldn't find them anymore, and every year or so I check the interwebs and they're just not there.

Lately, cookies around here are pretty limited.  I get my local fancy oatmeal cookies, because I can't make them worth a damn, and I make a pretty banging chocolate chip cookie, and then once or twice a year I take a photo inside my purse and we see these: 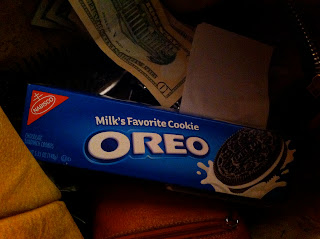 Really, that's the range, and it's a good thing that I don't bake more cookies, because I'm just terrible at it.  I can bake bread.  I can bake bread like it's a hundred years ago and I have to, but sweets are not my forte.    It's fine, because we're not big sweets people.  But I'm haunted by how good these pear biscuits were and once I saw that local pear jam was available all winter, I committed myself to trying to recreate them.

Spoiler alert: I did not recreate them.  Note that this recipe is called "Pear cakes" and not "Homemade Orchard Pear Pim's."

What's worse is that there actually are recipes floating around, so it's not like I had to re-invent the wheel to make homemade pear Pim's.   I didn't notice at first, but in doing a recent search for these cookies, I found this forum where someone said this type of cookie was called a Jaffa cake.  A quick Google for Jaffa Cake Recipe brings up tons of results, however, they're all um, foreign.  I can't cook in English.  I don't have caster sugar and I don't know what a gram is.

So looking to take the easy way out, I read through one recipe (sorry for the lack of attribution, but I read a lot of them) and the writer said she'd use a sponge cake next time.  Well, that's easy, I can find sponge cake recipes I can replicate.  So it was on.   Sponge cake, smeared with pear jam and topped with chocolate.

I'm no sponge cake connoisseur, I just don't get involved in cake like that, so I followed this recipe nearly verbatim, aside from scaling. 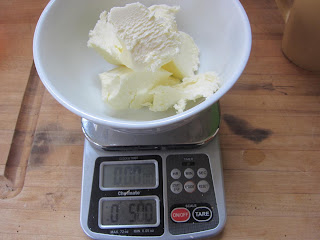 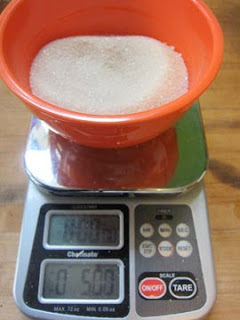 Five ounces of flour, set aside. 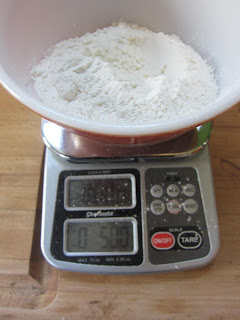 And five eggs, warmed up in a mixing bowl set on top of a bowl of warm water.  This was the scariest part, as I was sure the eggs would cook, and I kept taking the temperature and finding they were cooler than room temp and then nervously re-warming the water. 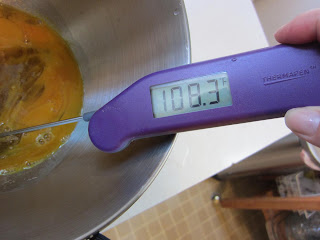 You whip the eggs and sugar together with some vanilla and it gets tall and fluffy. 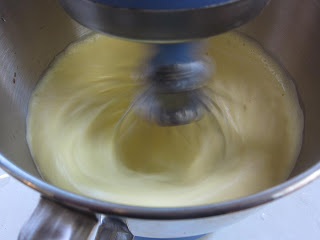 Then you gently fold in the butter and flour, in batches, and delicately pour it all onto a cookie sheet. 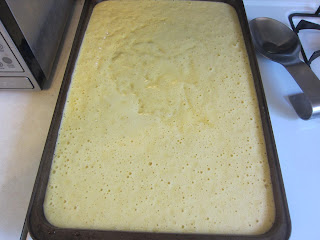 When it was done, I tried using a round cutter to make cute little cakes, but then wrestled with getting my rounds off the baking sheet, so I just cut "squares."  Yes, if these are squares then I need to go back to middle school geometry.   I spread those squares with jam, using a whole jar. 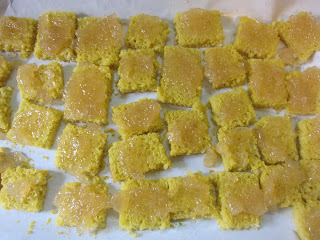 Then I melted the chocolate.  Slowly over simmering water, I stirred a good handful of Ghirardelli dark chips, then realized I didn't have enough, so added two milk chocolate bunnies I happened to have on hand.  This was still not enough chocolate, but was sufficient to make it far less tasty than straight good dark chocolate would have been. 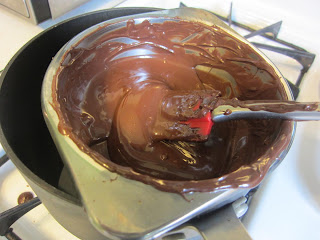 With a spoon and a spatula, we topped each cake with chocolate.  I popped them in the freezer to set up, and then set them out at room temp before serving. 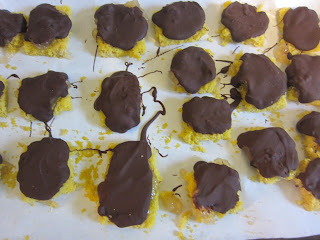 They were good, but they weren't Pim's.  The cake was too moist and fluffy (it was sticky and hard to work with, too) and the chocolate was thick on top but didn't coat the sides.   It was a decent dessert, because pear and chocolate are secret friends.  Their relationship is outshined by that famous thing that orange and chocolate have going on, but pear and chocolate work really well together. 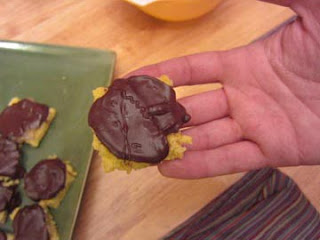 So this isn't a fail, in that it was a decent dessert, but it wasn't what I wanted it to be.  If you're going to try to make it, I suggest you cook in English and follow someone else's recipe, or make these instead and just make them prettier.
Posted by Rose