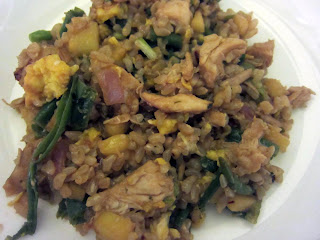 Pineapple salsa is good, but it can be a lot of flavor and maybe you don't want it tearing up the inside of your mouth for two consecutive days.  Cooking the pineapple takes out a lot of the sting, and turns yesterday's taco topper into today's one-wok dinner.

I'll quickly re-hash the story of the time Sous Chef Brian was supposed to make dinner and instead just made salsa and we ended up eating that on crackers with some cheese on the couch in front of the tv. He told you about this yesterday.  He said yesterday that I described pineapple as "my favorite" but what he didn't say was that when I used that word, when I was cutting up the pineapple, I said that to the fruit.  I think I said, "you're my favorite," to the pineapple, as a I cut it into chunks and stashed it in some tupperware.  I left, and he made salsa with it. There.  Good story, right?

Anyway, we had this pineapple salsa in the fridge, and I had already eaten quite a bit of pineapple and my mouth was starting to feel like I had eaten a big bowl of Cap'n Crunch, but I love pineapple too much to let it go to waste.  Bring on the pineapple fried rice.

I started with egg.  One egg, scrambled in a wok with salt and pepper until just cooked and still very moist.  Set aside. 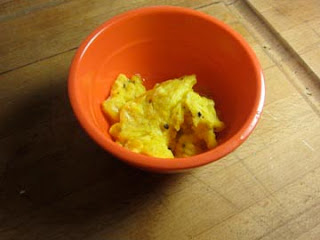 Not one to wash a dish, I wiped out that wok and added some cooked brown rice.  Maybe a cup and a half.   In a wok with a tablespoon of hot canola oil or safflower or whatever. 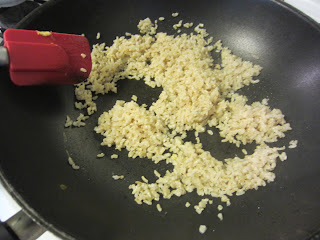 Swish the rice around pretty often, since you want to to crisp a bit but not burn.  Add flavor.  I used a clove of garlic, roughly chopped, a tablespoon and a half of soy sauce and a few drops of fish sauce. 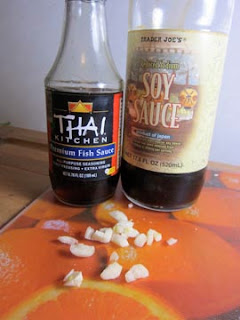 At this point I added some grilled chicken I had leftover in the fridge, but you could easily swap in tofu or just do veg. 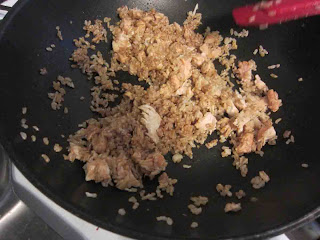 Toss that around a bit, still on high heat.  Now it's just about putting it together.  Add a cup of leftover pineapple salsa.  Toss that. 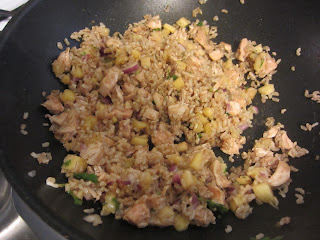 It was at this point that I realized I owned approximately zero vegetables.   We're in this limbo between the Winter Harvest and our new CSA, and maybe I hadn't been to the farm market.  Maybe I was in a place of supermarket pineapple rather than local berries.   So I had these ancient frozen green beans.  They were worthless, texture wise, but did the job. 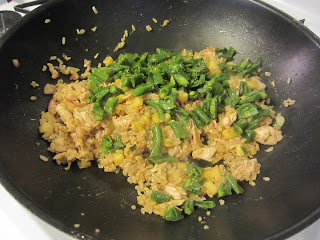 Mix in that egg you set aside. 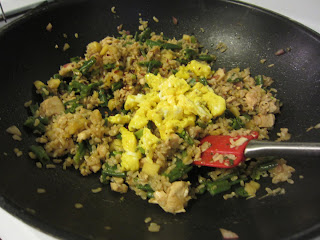 And turn off the heat.  Add some scallion and red pepper flake, and if you have some more cilantro leftover from when you made the salsa, do that too. 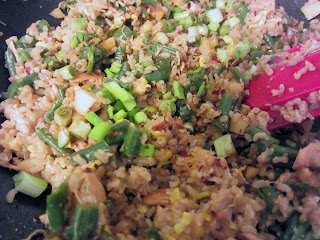 Serve hot.  It has a nice sweet and sour thing going on, but with a cup of salsa in here, it wasn't overpowering at all.  You could add twice as much salsa and you'd have a real tangy-sweet situation (in a good way) or keep it exciting with other flavors and leave the pineapple in the background. 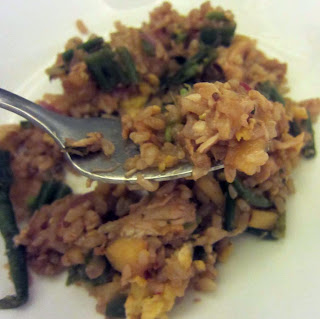