I got a new knife.  Everything is different now.

Our current knifes were a wedding present, which means they're fairly old.  Also, they've been used on glass cutting boards and run through the dishwasher.  Because we didn't respect them.

They're fine knives, good knives even, and before we got them, all we had were steak knives.  Seriously. We lived in the woods.  We ate boxed mac and cheese.  But it never dawned on me to treat them well, until it was too late.

And then it would come up from time to time, when I made egg rolls and joked (sort of) in the comments that I couldn't cut them in half neatly.   Or when my parents came over and used my knives and complained about them, which is kind of exactly the opposite of this conversation on The Kitchn.  Or when I'd go to someone's house and use their knives and really, no matter the knife, I'd be impressed with it.  Because it could cut things.

Our knife set came with a steel, which Sous Chef Brian has occasionally used, but steeling straightens the blade (which is important), but doesn't actually sharpen it. 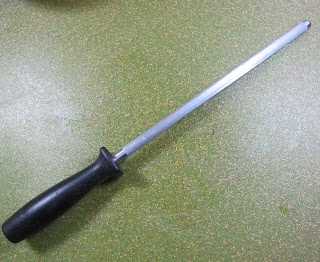 So I needed a basic chef's knife that would, you know, work.   By chance, we were watching America's Test Kitchen on PBS.com one day and saw them review chef's knives.  (It's here, sort of, but behind a paywall).  They highly recommended the Victorinox Fibrox knife, and it was pretty cheap so it went on my Amazon Wishlist (we're those people).


I was thrilled to unwrap it this holiday season, a gift from my father-in-law, with a stern warning that it was not to be used on Sous Chef Brian.  With my personal fear of kitchen injuries, the warning should have been that the knife not be used *by* Sous Chef Brian, just because whenever he's handling sharp objects I dial 9-1- and hover my finger over the other 1.  I'm not for emergencies.


And yes, sharp knives are safer. Somehow you're less likely to cut yourself on a sharp knife (probably because it goes where you want it to and you don't have to force it), just like you're less likely to fall off a bike if you're going fast.  I hear all of that, but I also shaved my fingernails several times when I was first using "the good knife."


We keep it in it's own impossible to open case, because it doesn't fit in our current knife block and we're still looking for a good place in the kitchen to install a magnetic knife strip.  We use it, wash it, dry it and put it away, which we do for nothing else in the kitchen.


But after a few weeks, my other knives started to get jealous.  I was just using this one and the bread knife. I'm not fancy enough to use knives for their proper purposes, and I really don't bone fish or filet meats.


So I took them in to get sharpened.  People talk about going to hardware stores to do this - I went to a fancy-pants kitchen supply store.  Unfortunately, this meant driving my knives to New Jersey, thinking I'd have to hang around a mall for a few hours and pick them up... they weren't ready until the next day, which meant going back across the bridge, so with all the driving and the tolls, it was unreasonably inefficient.   But they're sharper.  Better.  Not quite as good as the good knife, but they've had a rough go of it, what with the glass cutting boards and the dishwasher, so I forgive them.


Cook's Illustrated put out this handy guide to DIY knife sharpening (I'm sure I'd do it backwards and sharpen the top, rather than the blade, but do what you will).


So whether you do it yourself or pay someone to do it, go ahead and sharpen your knives. If it's been a while, it's life-changing.