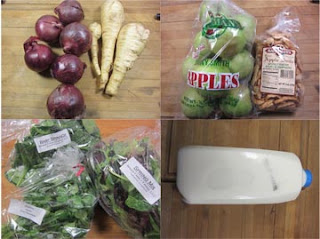 I think we're finally really in the groove of this thing, after nearly four months.  I mean that in the beginning, I'd get all excited and tell you about my super-short grocery list following the buying club pickup.  But in reality, when it came down to it, we'd get an idea in our heads and own none of the ingredients and go out to the store and get a whole menu of food we didn't already own, and then pick up more just-in-case stuff and it seemed like I was spending as much time/money at Whole Foods as I used to, but also doing the buying club.

The there were a bunch of weeks where I ordered far too much stuff from the buying club, I guess to try to make myself stop going to the grocery store so much.

But something has clicked, and I haven't been to a grocery store in a handful of weeks.   We've had a "grocery list" on the side of the fridge for a while now.  It says, "Mirin.  Brown Mustard."  We've been out of both for a little bit.  Mirin longer.  But as previously discussed, we own other mustards. And the mirin thing just doesn't seem desperate.

I have milk and butter and yogurt in the freezer from overbuying via the club, and plenty of eggs in the fridge, and I still have a bit of frozen veg left (not much) from the summer and fall, and a cabinet full of grains and things.  I don't need to go to Whole Foods.

Sure, I'll need mirin eventually, or I'll get inspired to make something that needs parsley, or we'll run out of cereal. I'll go back.  But I'm finally in a place where I don't need to go.

Milk, which in reality we didn't need, since I'm off coffee and I haven't made cookies.  Straight to the freezer with this one.   This is from Maplehofe Dairy. 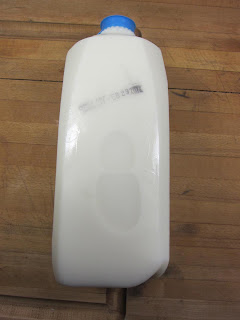 Onions from Landisdale Farm and parsnips from Livengood's Produce.  I clearly remember when we were picking veg this time, I was uninspired by all the squash and I said to Sous Chef Brian, "How about parsnips?  I could roast them." And he agreed.  However, he did the picking up this time and when he got home he said, "I think we got some sick carrots." 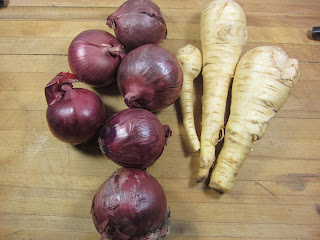 Spinach and spring mix from Rineer Family Farms.  Cilantro from Silver Mine Farm. 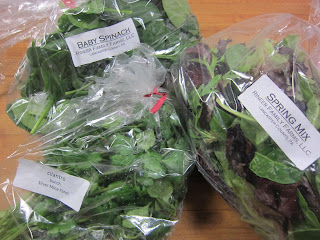 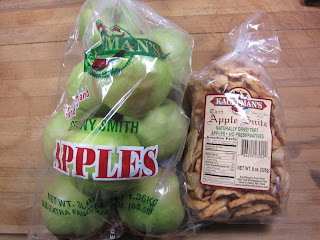