Eggplant rollatini is among my favorite dishes.  Smoky eggplant stuffed with creamy ricotta in a flavorful sauce.   How could you go wrong?  It's also something I'm more likely to buy than make.  When I was in school on weekends (the aforementioned days when I'd come home at 4 or 5 and Sous Chef Brian was home all day and he'd tell me he forgot to eat), sometimes I'd pay a million dollars to get eggplant rollatini from this place a lot of people have heard of that I won't name.  And we'd bring it home and heat it up and it was the best dinner ever.  Then one time I got it and it was fuzzy.  Like, blue mold fuzzy.  So that ended that.  Mmm, hungry yet?

This other time recently I went to this Italian place (I'm in a neighborhood with a lot of that) and ordered the eggplant rollatini and it was A. stuffed with mozzarella or some other gooey, flavorless cheese and B. full on drowned in a thick cream sauce.   I'm all for creamy and cheesy, those are two of my favorite things, but if it makes it so you can't taste the rest of your food, what's the point?

So I got these eggplants, and I had that sauce and I had a plan.
I also had some creme fraiche left over from a secret recipe I can't talk about, and I don't typically own that or know what to do with it.

My eggplants were small, and this means that from two eggplants, with fairly sloppy slicing, we only got a meal for two.  Scale as necessary. 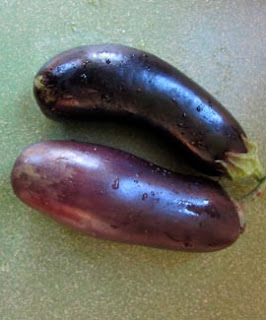 We took these eggplants and ran them over the mandoline.  I'm sure you could accomplish this with a knife if your knife skills are better than mine.  The goal was thinner than a quarter-inch.  That was, you know, the goal. What happens happens. I set the scraps aside for another use.  Salt them liberally and rub the salt into the eggplant, then let it sit to drain.  Amazing amounts of water come out.  Give it time.  I gave it like 20 minutes while I did other things, but you could keep going with this. 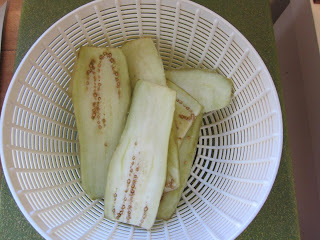 So let's do other things, shall we?  Somewhere in the background here I steamed up 9 chard leaves.  What else? Ricotta?  Sauce?  I made ricotta, because now that's all I do.  I prefer fresh ricotta and I think I'll buy it only for hardcore uses like lasagna because of cost and time, but when I'm using a cup here and there I just make it.  I tried David Lebovitz's version this time (usually I just do this) and it was good, a bit creamier than my usual.  I don't know if I'll adopt it full-time or not.  I don't have a shot of just cheese, this is after I crumbled it and added a bit of mozzarella and some black pepper.   So I had about a half-cup of ricotta and 2 tablespoons of mozzarella for seven tiny eggplant filets.   Filets?  Pieces. 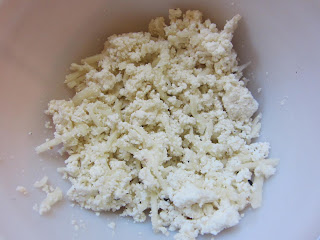 Sauce too, right?  I bought some basil, because as I mention in every single post, I can't keep basil alive. 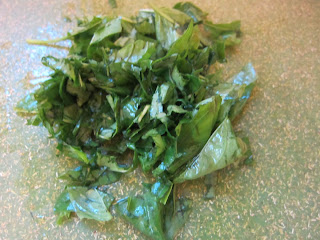 And I had my pre-existing red sauce.  I thinned out my sauce a bit with tomato juice (which I "made" very simply at the end of this), but let's imagine you're starting with sauce that is of sauce consistency.  Something you could serve over pasta.   This can be your own fresh sauce, something you've frozen or canned, or Prego for all I care.   Take that sauce and basil the hell out of it. In most applications we don't cook basil, we top hot food with basil, but I kept this at a low simmer for 20 minutes while I made other things, and it was fantastic. 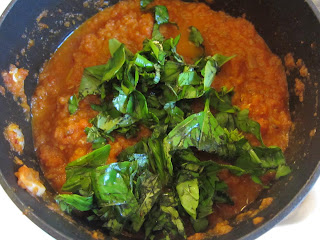 Stir that around and simmer on super-low. 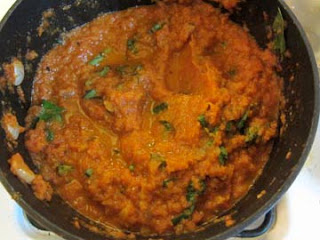 Also, make it creamy.  As I said, I had this leftover creme fraiche, but I'm not going to tell you to run out and buy (or worse, make) creme fraiche for this.  Use heavy cream or sour cream or cashew cream or, I don't really care, that fairly scary looking cream cheese cooking cream crap (alliteration).  Put something creamy in here.  I used two tablespoons of creme fraiche to about four cups of sauce. 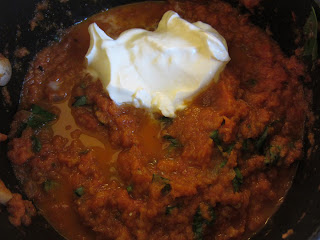 I stirred that in and thought, everything in the world needs more basil, so that's what I added. 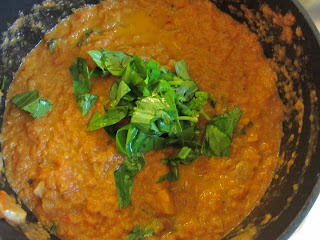 Is your eggplant dry yet?  We toweled off the eggplant and we threw them on the stovetop grill.  I was surprised at how much smokiness they took on, since they weren't grilled outside, but if you've already got your grill going, do throw these on too. Your goal is cooked throughout, with nice grill stripes. 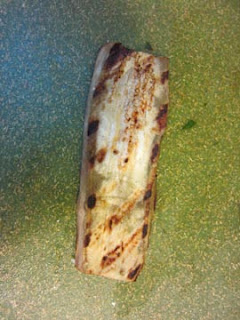 Preheat the oven to 350ish or so.  Coat the bottom of a baking dish with your beautiful basil cream sauce.  Make eggplant rollatini. 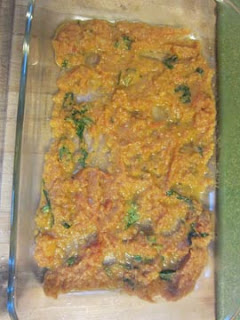 Take a slice of grilled eggplant and layer it with chard (you could use spinach or the green of your choice).  Remember I steamed this in the background earlier.  Cover the eggplant in a thin layer of chard. 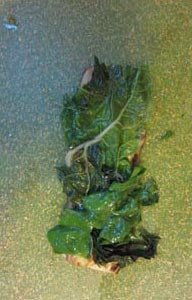 Take your ricotta/mozzarella/black pepper filling and put a good sized heap in the middle of your eggplant.  How much?  I used just over a tablespoon on each of mine, but mine were tiny and we ate all   7 between the two of us.  Mine were appetizer-sized.   If you use a big eggplant, once large slice should be a decent serving and you'll want maybe more like two and a half tablespoons of filling. 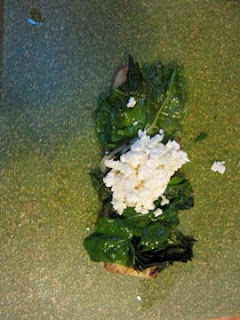 Roll the eggplant up and place it seam side down in the baking dish.  We used a big dish because we didn't quite realize how little eggplant we had. 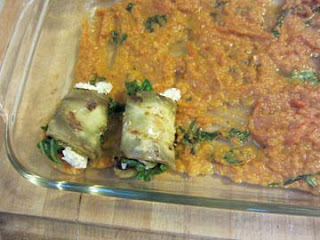 Keep doing this until it's done. 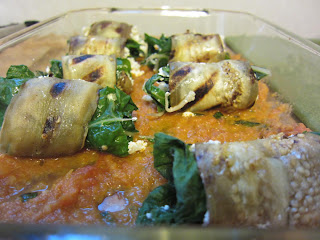 And put a good scoop of sauce on top of each roll. 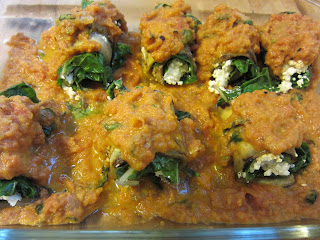 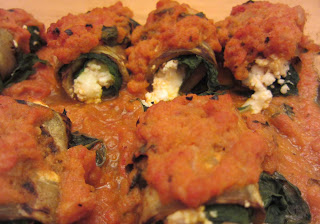 We served it all dainty-like, two to a plate, and then just started eating out of the pan. 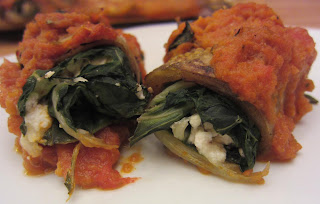 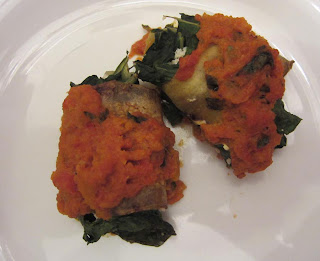 We had a good bit (a few cups) of leftover sauce, perfect for throwing on pasta with misc veg for a quick lunch.

Eggplant and Chard Rollatini in Basil Cream Sauce
by Saturday's Mouse August-23-2011
Smoky eggplant filled with creamy cheese in a basil-y sauce, yum! Note that I used a small amount of eggplant and had lots of extra sauce, scale as necessary.
Ingredients
Instructions
Slice eggplant thin (again, see that I made just a little eggplant and a lot of sauce - scale as necessary) and salt liberally. Rub salt over eggplant and set aside to drain at least 15 minutes, up to an hour. Eggplant will darken. Take 4 cups of red sauce and add basil, simmer low. Add cream - I used creme fraiche, but cashew cream, heavy cream or sour cream would work. Keep sauce on low while preparing eggplant. Take each eggplant slice and top with enough chard to cover. Mix ricotta with mozzarella and black pepper. Top each eggplant slice with enough ricotta to fill - for tiny slices, just over a tablespoon, for bigger slices, more. Preheat oven to 350, and coat bottom of baking dish with sauce. Roll each eggplant slice up, and place seam side down in the dish. Top each with a good spoonful of sauce, and bake 15-20 minutes until cheese is melted.
Details
Prep time: 25 mins Cook time: 20 mins Total time: 45 mins Yield: 2 servings
Posted by Rose