A few weeks ago, Sous Chef Brian was all, "MEXICAN FOOD!!" and I was all, "eh. Long wait to get in."  So we went somewhere else.  La Lupe is up by the Italian Market, right next to the damn cheesesteak places.  And it was awesome. 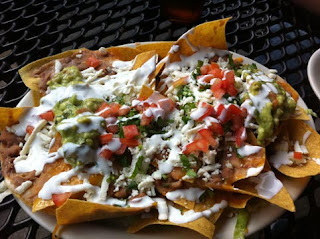 We started with something that was described as chips with guacamole and cheese, but actually called Nachos Supremos.  I still didn't expect nachos.  It was nachos.  With some great guacamole.

Sous Chef Brian ordered a beef burrito, which was fully loaded with grilled peppers and onions.  It was smoky and saucy and came with a very nice side salad. 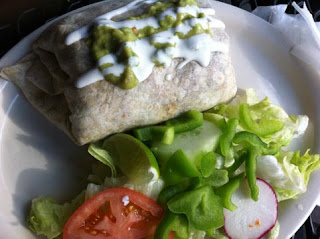 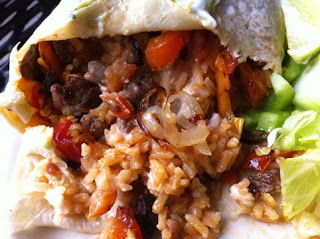 I ordered two tacos, because they didn't have tamales that day.  A chicken taco and a grilled cheese taco. 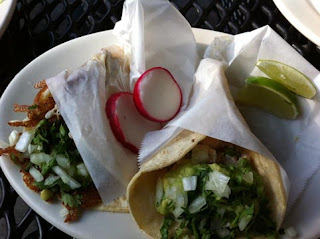 The chicken taco was bright and loaded with cilantro (not so much on the chicken).  It was light and fresh. 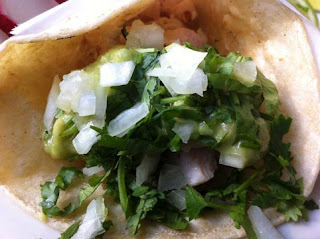 But the grilled cheese taco was something I wouldn't have thought possible.  Cheese, grilled and wrapped in a tortilla.  Cheese.  Grilled.  It was like a cheese omelet, sans egg.  I don't know how to explain it.  If I did that to cheese, I'd have a lot of pan to clean, and no cheese to eat.  But it was incredible. 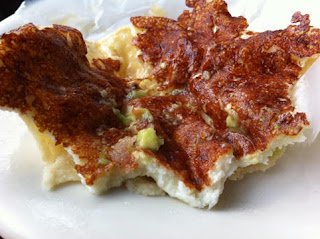 The perils of outdoor eating on mesh tables include pointing out the tomato on your husband's shoe hours later. 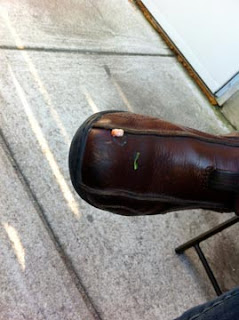 La Lupe is moving further up 9th street (away from the cheesesteaks) and we're going to make a point of getting to their new location.  If for nothing else than to figure out how you grill cheese and tuck it into a taco.