Week 13 is the week when the veg all fit together into one tidy package.  I'm not saying anything revolutionary here, my farmshare was Mexican food.   There will be a pasta salad, there might be a stuffed pepper (I have a pepper from last week), there will be tacos. 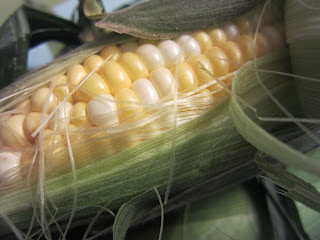 We got three ears of beautiful bicolor corn.  Actually, we got four ears of corn, but three were beautiful and one had something horribly wrong with it.  That happens sometimes when your veg aren't coated in plastic. 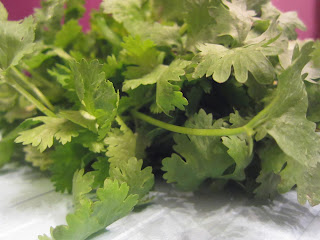 Another bunch of cilantro, my favorite herb. 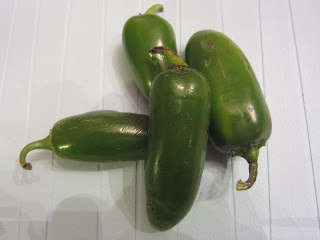 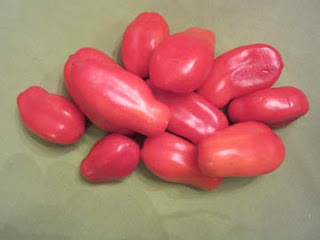 Plum tomatoes that were ready to be sauce.  I threw them into the freezer so they'll be easier to skin later, when I'm feeling saucy. 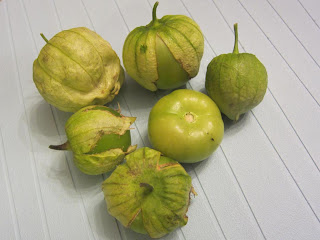 Tomatillos.  These are my first tomatillos.  I was surprised at the texture of the outer covering, which I had imagined would be papery but it's actually tougher than that and a bit slick.  Anyway, tomatillos.  Salsa?  Something with chicken? 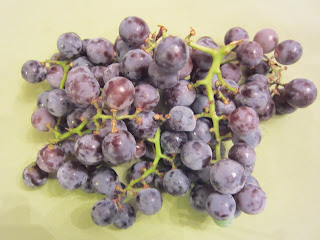 I also got concord grapes, which I continually forget are my favorite thing on earth.  My grapes gave me a chance to bust out my clearance-rack ceramic berry basket from Sur la Table, which I thought would have to hide until next year's berry season. 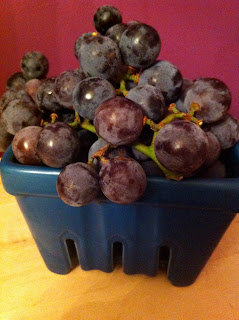 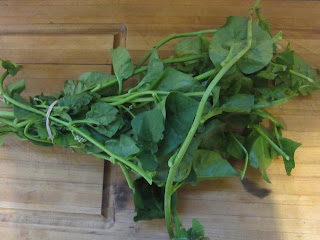 At this point we look at the produce and we're like, whoa, no salad.  Wait, what's that green thing?  It's not salad, let me tell you that.  It's "malabar spinach" which is not spinach at all.  The internets tell me that I don't really want to eat it raw, but I'll like it cooked.  Generally up to vegetable challenges, I rinsed a leaf and put it in my mouth and didn't see what the fuss was all about.  It was more chard-like than spinach, but not a bad flavor.  Then I felt it.  It was like my mouth was too wet.  Like I'd been involved in a middle-school makeout session.  It was slimy.  In my mouth.

A quick Google gets me this adjective: muciliginous.  I have to say, I wasn't familiar with that word before, but I was frightened from the get-go.  So I'll cook this one, and hope for a textural change. 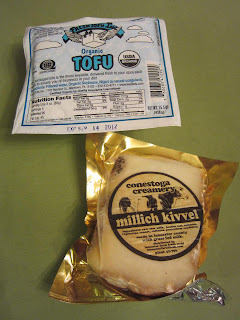 Also appearing this week, tofu and some unfamiliar cheese.

There were peaches as well, but you know how I feel about peaches.  I passed them to a neighbor as I walked up to the house.

This is our 301st post, so I owe you a contest or something fun.  Let's give it few days and come up with something awesome.