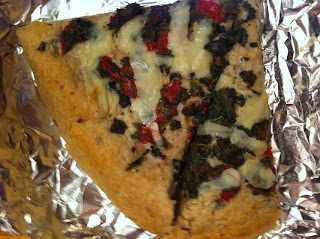 Well that looks a bit sad, but I didn't know I was writing a food blog when I made the pizza, so poorly taken photos of leftovers is what we have.

First a note - you have to want it. If you can get a ball of dough in the deli case for $1.29, ask yourself, what are you saving and why. Why do you want to spend three hours on dough? Also, I'm not good with recipes. I feel like I should give you more info than "do this then that".

[Edited to add: There's a step-by-step version of this, with photographs, here.]

Put 1/4 cup warm water in a bowl. They say "baby bottle warm" but I go with "just warm to the touch, barely"
Add some honey. Or sugar. Like a tablespoon. Dissolve.
Add a packet of instant yeast. I tend to buy the kind that says "especially for whole wheat!" on it.
Swish it around a bit, stir lightly, whatever, walk away.

10 minutes later, come back. Is it frothy? Good! You're all set.
If its not frothy you got a bad packet of yeast. Go back to start.

Put a cup of water in a mixing bowl (mixer or by hand? I just got a mixer, so that's how I do it now)
Add two tablespoons olive oil. Stir.

Add 3.5 cups of flour. I like to use 2 cups whole wheat and 1.5 cups bread flour. Also, I'm making up numbers. Keep an extra full cup on hand. Temperature and mood determine how much flour you need.
Add the yeasty water.
Add 1 tsp salt. And whatever else you want. When I have fresh (or frozen) herbs I go to town. Oregano, Marjoram, Rosemary. Maybe a half cup of herbs? Or not, that's ok too. Or just some red pepper flake. Or some serious grain if you feel all multi-grain about it (I don't).

Now knead a bit (mixer set on 1, or with your hands) until you get a solid mass. Ok if it's sticky but you want it to be one thing. Like you no longer need to scrape much off the bowl, because it's nearly a solid. Maybe a plasma. Maybe 5 minutes.

Happy with your mass? Good. Cover the bowl with a damp rag, and sit on Facebook for 20 minutes. Or be responsible and wash the dishes. You're letting it hyrdate.

Got a hydrated mass of dough? Good. Knead hard. Harder. Mixer set on 2. 7 minutes. Agressively by hand. Make it into a thing. Make it a ball.

If it's too sticky, add flour. As much as you need until it's not sticky. It's ok. It's all food. Keep kneading.

Get it to be a ball, by pinching and grabbing at it, tucking the ends under and slamming it down on the table. Throw it around, toss it back and forth with a partner. Slap it like it's been naughty.

You want a tight skin around it.

Now swoosh some olive oil (1/2 tsp?) around a mixing bowl, and put your ball in it. Cover with saran wrap or another rag. Not a wet rag. Put it in the warmest place in your house that isn't your oven. I put mine in the china cabinet, or in the basement somewhat near the heater.

Walk away. Come back in two hours. It'll be huge.

Is it huge? Good. Punch it down. Whoa, it deflates. Split it in two. You can freeze it, or put it in the fridge for a few days. If you freeze it, let it defrost in the fridge a day before using, then on the counter an hour or two until it comes to room temperature.

Anyhow, with your unfrozen half, roll it out. Make pizza. My pizza is never round, I've never even tried, but make it flat, and once it's fairly flat, hold it up balanced on your closed fists and move your fists around, spin it a bit and make it flatter. Grab and edge and hold it up and let gravity pull it down, turn it in your hands while doing this. Whatever, just make it thinner, flatter, bigger. I aim for under a quarter inch.

(favorite toppings - roasted garlic and spinach, bacon and chard, blue cheese and leftover steak, or absolutely whatever is left over in your fridge)

ALTERNATE REALITY (summertime)
Throw on a hot grill that's been lightly olive-oiled. Flip after 2 minutes, or whenever it turns to a solid. Top quickly. 3 more minutes and you're done. Eat fast. Best Pizza Ever

For the pizza in the photo, I roasted some garlic (a head), whooshed it in the food processor with 1/4 cup parmesan and a few drops of skim milk (because it's what I had). I uncanned some tomatoes and unfroze some spinach and drained them. Also, I was out of mozzerella, so that's string cheese you see.
Posted by Rose