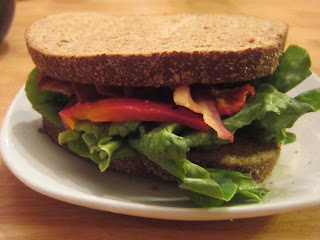 It's not a recipe so much as it's a sandwich.  I had that harissa mayo, and I wanted a vehicle to apply it to my face.

Really, what it is is Same Dinner Different Day. 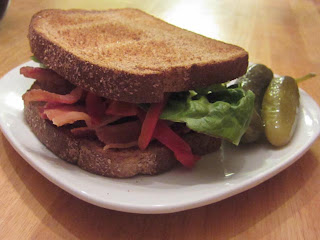 Storebought bread, yeah, it's time to make some bread, and local bacon, and fluffy bibb lettuce (they spell it bib, am I just wrong here?) and roasted red pepper strips, along with the remains of Sunday night's harissa mayo (vegenaise, really, but who cares when you're looking at bacon?)  It's a B.L.P.*

Sure, red peppers are not tomatoes, but they fill that role pretty well in sandwiches like this during the long, cold, tomatoless months. 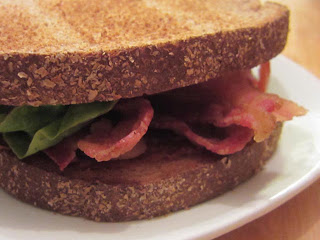 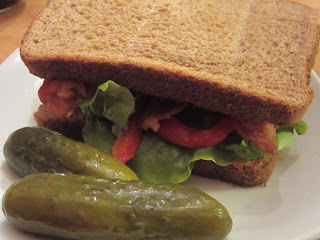 Fresh tomatoes are the reason Sous Chef Brian started eating tomatoes.  Long before Tomatoland, ok, just a couple years before, we still knew that non-fresh tomatoes sucked, even if we didn't know why.   Sous Chef Brian was used to these tomatoes, and had no reason to expect more of a tomato in July than in February.  A few summers of good tomatoes were the difference between him thinking tomatoes were evil and him starting to miss them each winter.

But this isn't about tomatoes, this is about peppers. And bacon.

*I must read too much Wikipedia, because when I see "BLP," I think "biographies of living persons."