Sausage and Peppers and Potatoes 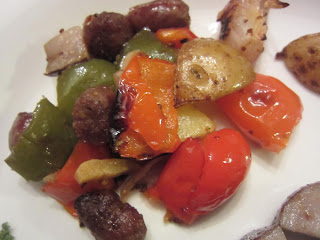 I didn't know what to call this, it just doesn't sound like me.


We were ordering food from the buying club a few weeks ago and Sous Chef Brian was all, "I could go for some sausage," and I was all, "Ew."  And then he was all, "If there was a sausage you'd eat, what kind would it be?" And I stared at the list of foods on the website and I said, hesitantly, "When I was a kid, I liked kielbasa."

This is true.  I did.  But I liked a lot of things.  I have great memories of bologna sandwiches and baked ham.  Like, it seems so good in my head that in the past 10 years I've tried both again.  And no, there's something about being 6 that makes bologna and mayo on Wonder Bread seem like a good thing, and the ham thing, I just can't figure out.  The idea sounds great, and then I'm sitting with it in front of me and ... no.  Just no.


So I was unsure about the kielbasa thing, but thought we'd give it a shot.


What better time to cook an unfamiliar meat then when you have company?  That's what I always say.


So, we had a semi-quiet New Year's Eve with MSNDG and her uh... "friend," and MSNDG likes all kinds of meat, so I figured I'd give it a shot.


I made the kale salad because I wanted something very vibrant to go with it.  They worked well together.


The kielbasa didn't look like what I grew up with.  It was kind of like darker hot dogs. 8 links. I chopped it up bite sized.

I mixed together honey and mustard and made a glaze, equal parts, and a bit of olive oil - 1/4 cup honey, 1/4 cup mustard, 1 tablespoon olive oil.  I poured that over the kielbasa. 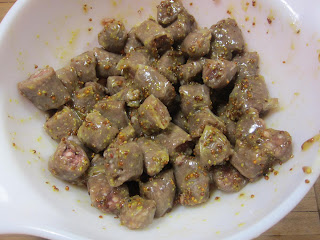 I cut up a blue potato and two yellow potatoes, for variety. 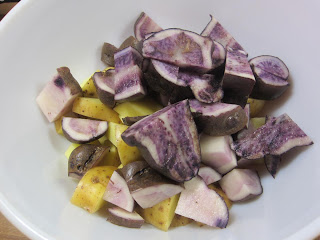 And two unphotographed peppers, and an unphotographed half an onion, chopped big (bite sized).  For some reason, I am now able to get organic bell peppers at Whole Foods.  Sure, they're imported from somewhere where it's summertime, but still an improvement.


Sprinkled with salt and pepper, then all together in a roasting pan at 425 for a good while, like 45 minutes.   Midway through I blotted the pan to absorb some of the moisture the veg had released, and tossed everything around.  I wanted crispy edges. 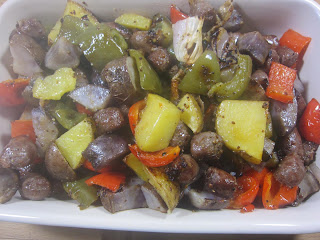 And it was good.  It didn't taste sweet at all, but the spice in the mustard came through.
Posted by Rose