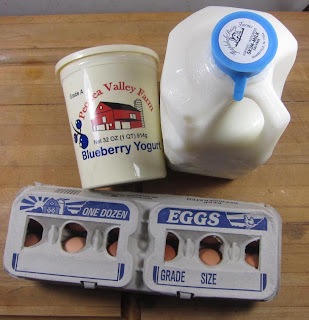 This is a weird week.  I ordered the wrong stuff.  Horray for the freezer.

I've been sickish (sokay, I'm better now) and I haven't been eating real food or cooking.  So there's already a full milk in the fridge.  This one went straight to the freezer.  Also, the world's best yogurt?  Straight to the freezer, already got last week's in the fridge.  And when I was planning to make the cinnamon bread, I was an egg short and Sous Chef Brian ran out and got some, so there are now 23 eggs in my fridge. 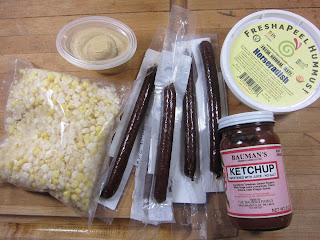 I bought frozen corn, because I'm out of frozen corn.  And ketchup, thinking it would be time for ketchup by now (it is not).  I'm loving this hummus, but of course, we still have last week's, and this time they sent a free sample of their garlic variety (yay).  Also, beef sticks, because Sous Chef Brian likes to snack on meat, but isn't big on the jerky right now. 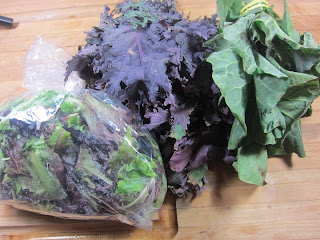 There's still some of last week's salad in the fridge, as well as all of last week's collards.  I have plans that involve a lot of collards, so I'll just blanch up and freeze both bunches.  Also, red kale.  Regular kale wasn't available, but red was.  Anyone know how to operate red kale?  I Googled "Red kale salad" and "massaged red kale," and I'm not getting anything, but unless I hear otherwise I'm still going to try. 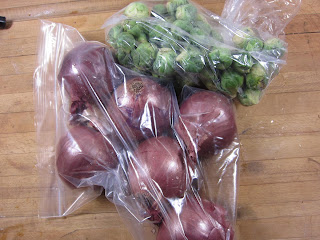 Yes, I still have last weeks sprouts to go with these.  The internets say I can blanch and freeze them, but I imagine they won't be great for roasting at that point.  We'll see.  Also, onions.  Usually I order red onions and I get two giant onions - I think I prefer this, several medium-large onions.


It's come time to start to figure out what I'm doing next season.  I wrote a lot about that last year, about picking a CSA and all.  The buying club ends right about when CSA season starts.  So there's the one we just did last year, the one we did the year before (that Sous Chef Brian wants to do again), the one everyone else does, and the one that sounds ideal, but pickup is a drag.  There are probably others.  We'll figure it out over the next few weeks.


Local people, if you love your CSA, let me know about it.
Posted by Rose