Dining Out: Yes, I had Christmas Dinner at Ikea 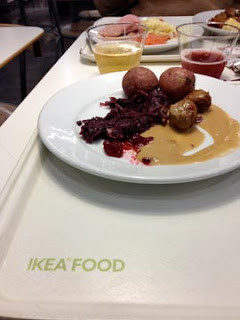 In my teens and twenties, I lived at Ikea.  Ok, in my teens I begged my mom to stop there whenever we were anywhere near Elizabeth, New Jersey, but in my twenties I lived close enough to a different Ikea to get there fairly regularly and I did just that.  I loved Ikea. I can walk into your house and name your Ikea pieces.  Who doesn't have a Poang chair or a Billy bookcase floating around?

A few years ago, I moved and now there is an Ikea at the end of my street.  Seriously, right there.
Sadly, we moved here pretty close to the time that we decided that maybe particleboard furniture wasn't a great long-term plan.  We decided to hunt the flea markets and the classifieds for real wood.  The glossy laminates of yester-home didn't fit anymore.  This doesn't mean that I don't go there anymore, and there are a few real wood items available, but now I spend my time in the Marketplace, where I bought the world's best garlic press (seriously) and in the As-Is section, where I buy scraps of things and make other things out of them.

Did you know there's a website dedicated to making stuff out of Ikea goods?  I even had a photo collage featured there five years ago.

Yeah, I made that.  And since then I've stained it and hung it in the new house.  Still awesome.

Wow, I write about food, right?

So Sous Chef Brian expressed an interest in the Ikea Cafe a few years ago.  Specifically, he expressed an interest in the Swedish meatballs.  I was horrified at the idea of eating at Ikea.  I mean, it's a furniture store.  That doesn't mean that I don't occasionally buy a jar of lingonberries to make crepes with, or a pack of cookies, but eating in the cafeteria at Ikea sounded worse than eating in most cafeterias.  We had the meatballs.  They were good.  We've done it twice since.

Then I got an email from Ikea about their Julebord event.  Christmas dinner at Ikea.  Yes.  Sous Chef Brian was immediately on board.  We had to buy tickets in advance, and the 7pm seating was sold out, so we ate at 5.

Surrounded by people much older than us who were wearing Christmas sweaters. 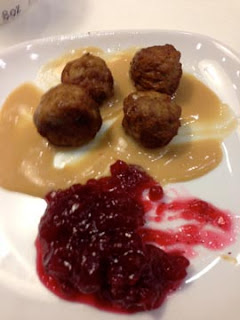 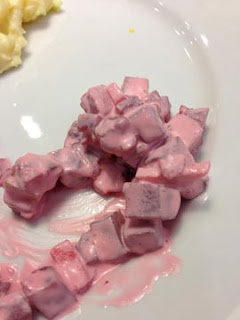 This unfortunate thing turned out to be beets. 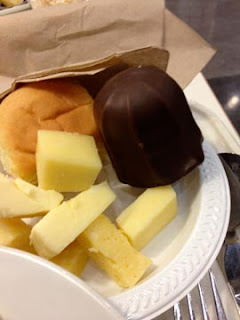 I'm not a desserty person so my dessert plate was mostly cheese, but this chocolate thing was full of marshmallow. 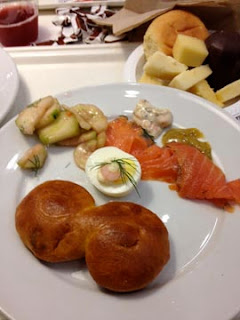 There was a ton of fish, but I stuck with the smoked salmon and a deviled egg with a tiny shrimp on it.  The cucumber salad was great.  There was ham, and some bready things (pictured above) that were not for me.

I'm not saying you should cancel your holiday plans and reschedule at Ikea, but it was a fun time.  We're marking our calendars for next year.